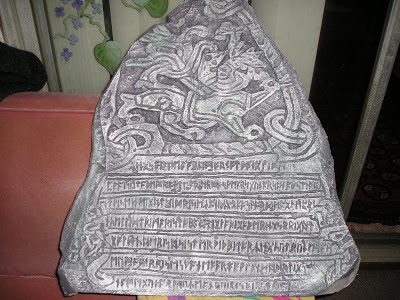 Not your ordinary scroll. We needed a Duchy for a Viking, and as we know, Vikings liked to carve things on large rocks to commemorate big events. We took a chip out of their granite.

This 'rock' is a hydrocal (nearly concrete) cast made from a plaster mold that was created from an original piece carved in a closed cell hard foam. This was a huge undertaking between myself, Gwenhwfyr, and Jeanette du Lac based upon the Jelling Stones of Denmark.

First we started with the text. I based the verbiage upon the opening of Beowulf attempting to maintain the same rhythm and kennings (compound words) as the original. Then I translated it into Futhark, truncating the text as necessary to make it fit on the 'stone'.

In English, the text reads: 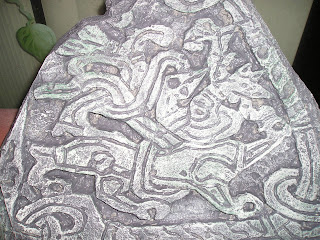 Kings are made for honor, not for long life.
Praise to the warrior, leader of spears
Gunnar son of our three sea land
Once and twice in might did he rise
Konnunger of swords and great eagle prince
Led he Trimaris to glory and battle
Gave he the rings of gold gleaming bright
Now Cherish his sister with Bytor her King
Let these runes be cut for memory sake
Are raise high this stone for Yarl and Hertig
To name Gunnar Duke on their reign’s first day.

Gwenhwfyr and I sat on my back porch using all manner of odd implements to carve the foam. Wood carving tools, steak knives, and even a feather quill. Gwenhwfyr worked the top section of the piece, carving the designs. I carved the text. It was not much fun, to say it gently although Gwenhwfyr is a masochist and seems to remember enjoying it more than I can recall. 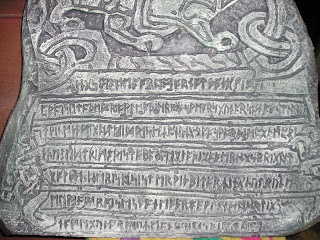 As I had never made a mold of anything before, I worked with a non-SCA friend who is a great sculptor and mold maker. We mixed the plaster and poured in over the foam. A day later I began the laborious task of 'evacuating the foam from the mold' which roughly translates to making your fingers bloody trying to dig foam out of the plaster cavities. Once finished with that it was time to cast the final piece. I mixed hydrocal (a quick-set concrete like product) with fiberglass for strength and a concrete dye which stained the concrete a medium grey. I coated the inside of the mold with soap to help the final cast release once it had dried and then poured the dyed hydrocal mixture into the mold. One day later we attempted to crack the mold away from the final cast. Here is where things went terribly awry. The plaster held on... like a face hugging alien... and refused to let go. I asked nice, I begged, and I think I cried a little. All to no avail. I then resorted to the use of tools. Hammers, chisels, screwdrivers, etc. Once I broke away the large portions of the mold I had to pick the tiny chunks of plaster out of each letter and design groove. It took days.

I finally finished and Jeanette came over to do some finish work on the rock. The overall grey color gave it a look of being concrete, so she used all of her powers of faux finish to give it the look of an age old rock, slightly moss covered. It worked. When presented to Gunnar in court, a group of his squires carried it in on a shield. I picked up the rock and balanced it on my knee. Gunnar had no idea what we were doing for his scroll. His jaw fell open and a communal gasp went up from the crowd. We were all pretty proud of our work, and our recipient was entirely stunned. Success at last.

Someone asked me that night if I would make something similar. I responded with a 'hell no' and then revised that to "ask me again in a decade when I have forgotten this experience."
Posted by Kristen at 10:19 AM