Although the words “Visconti Hours” often bring forth swirling images of hot pink hosts of angels and poison green architectural towers, there are many individual pages that are quite lovely and less… colorful than other parts of the text. When presented with the choice of insane color combinations or demure and pretty, Finneadan and I decided that we would both prefer something more mild. This is how we picked the page to use for Gwenllyan verch Morgan’s Laurel Scroll.

Mistress Finneadan sketched up the page and I painted, gilded and calligraphed. The text was written by Master Iefan. In this we were able to include both of Gwenllyan’s Laurels and also her former apprentice sister.

The devil was in the details and the tiny castles and buildings really took up the most time as far as the painting was concerned. We reduced the size of the initial so that we had a place for the text to be written. There are various 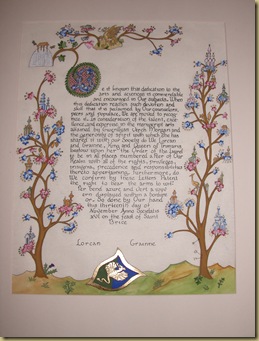 symbols that have been tucked into the trees and foliage so that various other apprentice siblings could be included. A chrysalis and emerging butterfly signify Gwenllyan’s transformation and also serve as an inside reference to my household, Feileacan Ghairdin, Gaelic for ‘butterfly garden’.

Executed on pergamenata using watercolor gouache, ink and 24k gold leaf. Time breakdown: I think Finneadan spent about 3-4 hours in sketch. I put about an hour or two into gilding and about another 18-20 hours in painting.