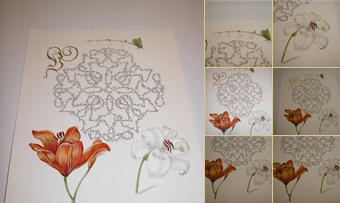 Text: Behold this fair gentle who among all good nobles of Our Society has proven herself to be a paragon of those ideals we hold dear.  She is a beacon to those in need of inspiration and guidance and a pillar upon which Our beloved Kingdom depends.  Her service and dedication know no bounds; having enriched not only Our Kingdom, but our Society as a whole.  In Our eyes she stands  an ideal peer whose sacrifices do not go unnoticed, nor will we permit them to go 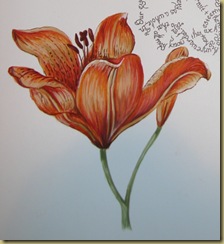 unrewarded.  So that all may know that we hold Stephanie of Nethyrwode in the highest esteem, We, Thomas and Elisenda, King and Queen of the Laurel Kingdom of Meridies  bestow upon you a token of Our respect and admiration.  From this day henceforth, we charge you to augment your personal arms with the Meridian Augmentation of three mullets in chevron argent.   Thus is confirmed your sole right and privilege to bear the arms describe by this heraldic blazon: Sable, a dragon's head erased, on a chief engrailed erminois three lilies azure, for augmentation on a canton sable three mullets one and two argent.  Proclaimed with Our voice and done by our hand and seal this 11th day of September, Anno Societatis XLV, being 2010 by the Common Reckoning. (Written by Thomas and Elisenda)

Mistress Stephanie’s arms included three lilies, so I included three from the Mira Calligraphiae Monumenta: Lily of the valley (top), Orange lily (bottom left) and a Madonna lily (bottom right). The text is fairly long but I still had to add some text at the end to complete the knot work design.

How to Write in Knots


Step one: Draw the interlace and flora: Although the text looks like it would make you crazy, it is actually easier than one 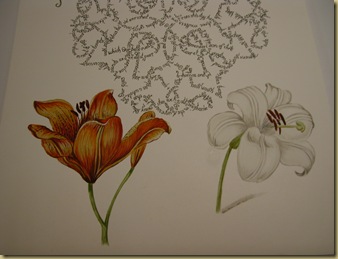 would think. First I lay out the knot work and produce a top and bottom line in pencil to use as guides for the calligraphy. In that design I verify all of the knot work over and under passes.

Step two: Text layout: Later I pencil in all of the text to make sure I have enough or not too much space. This also keeps misspellings to a minimum. and

Step three: Get the ink and the whiskey: I did the calligraphy this piece in one sitting, stopping to do a shot of whiskey when I hit the very tight knots at the N, E, S, and W compass points of the interlacing.

Step four: Get sober and then paint: After completing the calligraphy I came back through an painted the lilies. I finished the gilding last on this piece because I knew it would take the least time. Also, after everything the gilding actually seemed nice and easy.

Step five: Walk away: Slap that page in a frame and walk the hell away before your make yourself crazy with what you could have done better.
Posted by Kristen at 9:35 AM 4 comments: