On Public Enemies and the Wars Between Us

Well, it has been a couple of weeks. A lot of things have happened, words said and actions taken. As we can never go back to the time before this, this is now our reality. A big damn line was drawn in the sand (or dirt, Pennsylvania actually has that) and sides have been taken. Here we are. And yes, it sucks.

The issues of bigotry, racism, intolerance, homophobia, transphobia, Islamophobia (and dozens more distasteful isms and phobias) have now been addressed in public, as they relate to persons in the SCA. It's been rough, it's been ugly at times. It's been eruidite. It's been inspiring. It's been a galvanizing time. It has also sorted most of the SCA out into a few distinctly defined groups.


I think that covers the major reactions I have seen, and the words I have desperately wanted to say to them.

Unfortunately, these issues have blown up in the most public venue of the SCA: Pennsic War. Or, perhaps, PennsiCon because so little of it is really like an actual SCA event. Over 10,000 people are there while these events unfold. Unfortunately, this particular issue that surrounds a King and his adherents, a reportedly racist Candidate being elevated to a peerage, and a Dissident: a guy who thinks he's a normal fellow, but is actually a cult of personality.

So here we are, the SCA is buzzing with actual discussion that was sparked by these events. Everyone in a single place. Events unfolding and then passing by word of mouth and by social media. People reacting, sometimes very far away and those reactions being heard back at the point of origin of this particular ground zero. 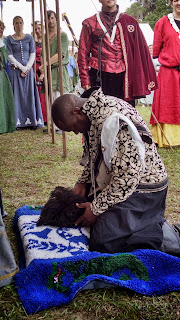 We have a King, a Candidate, and Dissident and with just these three people, and those close to them, this entire issue has been encapsulated, but in an incredibly public way. Everyone has an opinion, is galvanized, and we are all waiting on the edge of a precipice as letters are penned and screen shots are taken. We are caught between increasingly public enemies at an enormous war and we are all waiting for the shoe to drop. And now they are coming home from the wars, back to the fields of their own Kingdoms and they are carrying this story with them. Then, there will be no way to rake the leaves back into a neat pile.

Can we go ahead and deal with this, now? Please? It's time, SCA. Action. Honor. Society. Let's be the things we claim we are. Be the dream, not the nightmare.
Kristen at 4:32 PM